I chose this title for this next section because it is, as my latest discovery has revealed, what my 3x Great Grandfather George Robertson Nicoll was sitting on. If only it was still in the family.

So I’ve had this article for sometime now and thought to do some digging on it’s details.

It is referring to a parcel of land in The Rocks. I found a very cool set of old maps on the NSW State Library website and hazard a guess that it was in this area that I have marked in yellow.

Now the problem was that I just couldn’t find anything to confirm that it was George’s property. Property research for me just seems to be a bit hit and miss and so damn complicated. I’m sure it is a lack of skills on my part but I haven’t been able to tap that silo of info as yet. (Not giving up) Luckily for me though, I remembered on one of my visits to the NSW State Archives and Records center at Kingswood (https://www.records.nsw.gov.au/archives/collections-and-research/guides-and-indexes/reading-room-guide) that I had seen something about property in the Rocks.

Seven houses, in Gloucester Street and numbered. What a find! Only issue, which I am discovering comes up quite a lot, small mistakes in names or details. The re: reads, “…Estate of G W Nicoll deceased” but it should read G R Nicoll as G W was still very much alive in Sept 1901. The next document also backs these details up and sealed my fate as a future poverty line fringe dweller.

Bruce Baird Nicoll is my 2x Great Grandfather’s Brother. You’ll note that this Memo’ is dated Nov 1901. The 08 stamp date will refer to my 2x Great Grandfathers probate hearing, I think as these 2 documents were in with the papers stored in his will paperwork. So lucky to find them. You will also see the Rocks Resumption Act has come up, this bit of info has lead to another couple of lucky finds.

This Act was enabled by the NSW Government to help combat the effects of the bubonic plague that was rife in the area at the time. Plans were drawn up as to the area that would be resumed, over 900 houses, wharves, shops and warehouses, encompassing most of the headland. ( https://www.therocks.com/history-and-heritage)

I started digging into the maps, (which are awesome) and this appeared.

There it was, the confirmation I was looking for, his name and the property numbers, 84-96. I then wondered if there might be a photo of the property. Along with the maps a whole range of photographs were taken of the area at the time. So I started searching. The markings above the final E in GLOUCESTER in the map above are the entrance to a very famous historic pub, The Whaler’s Arms.

If you compare the line of sight in the map with this photo, it has to be one of those buildings down on the left, just which one?

I then worked out that the building in the center of this photo is The Ship and Mermaid, another very famous and infamous pub of the Rocks. On the map above it is shown as the stepped back property from the road and numbered as 374, which matches up with what is shown in this photo. The next property is vacant with the wall around and marked as 375 on the map, we then have the set of stairs in both the photo and the map which means…

This is George’s building, 84 – 96 Gloucester Street, note the 7 doors. I also found it in the background of another few photos.

That is the back of No. 96 at the top of the stairs on the right. The Pub at the top in front of George’s building is the Ocean Wave and the building to the left of George’s is T Holdaway, Fruitier and Grocer.

What a great find and an actual look into what George’s world was like. This is what it looks like today.

This is from as close as I can get to the vantage point in the earlier photo of the Whalers Arms. See how they have an outline of the old Pub on the screen above. This site is now an archeological dig site known as “The Big Dig” The pic below is almost the same position as the Ship and Mermaid photo.

Below is the only listing I could find in the Sands Directory for George ever having resided at the property.

And then on a very interesting final note, remember how I mentioned earlier that the Ship and Mermaid Hotel, one door up from 84 was famous and infamous, well check these out:

I also came across articles on Trove where it was stated that it was used to hold coronial inquiries on many occasions. What a shame that amazing piece of Sydney history and George’s row of town houses are gone.

This beautiful image is an engraving on steel by John Swan, Glasgow and is courtesy of the Dundee City Archives Flickr account. I chose it as the blog banner as it has a lot of significance for my family. It is the home town of George Robertson Nicoll my 3x Great Grandfather and author of the Manuscript. He is 12 years of age at the time of the depiction. He was born in the building directly attached to the building on the right hand side of the etching. If the etching continued you would be able to see it. (Spoilers, I have images to share later.)

The building in the center of the etching at the back of the square (not the one set back with the cross on top but the one to the right of that) is where George’s Grandfather, James Robertson, my 5x Great Grandfather lived and operated his clock and watch making business from for over half a century. (It stood until the mid 60’s)

And finally, the building on the left with the spire a top is the old Dundee Town House, to the right of that you can just see a line of horses depicted coming from in between the buildings, well that was a street that led the way to the Green Market where George’s Father, James Nicoll, my 4x Great Grandfather and his Father, Thomas Nicoll, my 5x Great Grandfather were Master Block and Pump makers.

I know, nuts right? To have this window into their time, it’s not a photograph but the very next best thing I’m thinking. You might be asking, well how does he know all this? Well, George’s manuscript and hours of late trawling through websites to confirm. I will share that part of the journey but just wanted to explain why I was using this picture.

A mind blowing find at the National Library of Australia.

I found out back in 2012 from an article at the time, that my 3 x Great Grandfather, George Robertson Nicoll had written a book and that the library had a copy of it and the original handwritten manuscript in its collection.

The article written by Judy Cannon (no relation to Alex) and titled “For the Love of Travel”, was inspiring and really piqued my interest.

It took another 6 years but I finally got to see both the book and the manuscript in Oct 2018.

There were only 25 copies of the book printed, the Mitchel Library in Sydney has one, this one at the NLA and presumably the rest are scattered around the world. My Cousin Viv in Scotland who is undertaking a proper research study of the Nicoll’s has mentioned that her family lore says that there are a couple more floating around that were dedicated to George’s Neice’s.

Now we come to the manuscript. I half expected it to be some loose bound pages in a folio sleeve, huh! Out comes a big satin bean bag cushion and gloves and a very pensive glowering Librarian instructing me on how to handle the manuscript. He delivers to me a large grey box with a number of different manuscripts housed together. Taking up most of the space was this huge tome of a thing that looked like it was straight from the set of “Gringotts” in “Harry Potter”.

I very gingerly opened it up and was stunned to see that it was filled with the most amazing handwritten script, 319 pages to be precise from my 3x Great Grandfather and then a further 40 pages by his son John Baird Nicoll on a cruise he took with his Wife around the South Pacific. I was gobsmaked. Just look at the title page below.

I couldn’t believe what I was reading, 1890, from memory and about my family. Can’t wait to share more with you. Will post soon.

Thanks for joining me! I hope you enjoy reading about my family history discoveries as much as I have in discovering them.

These three amazing people have been so generous in giving their time and support to me in this journey. I cant thank them enough. My beautiful Wife, Alexandra and our amazing Sons, Calan and Xander. 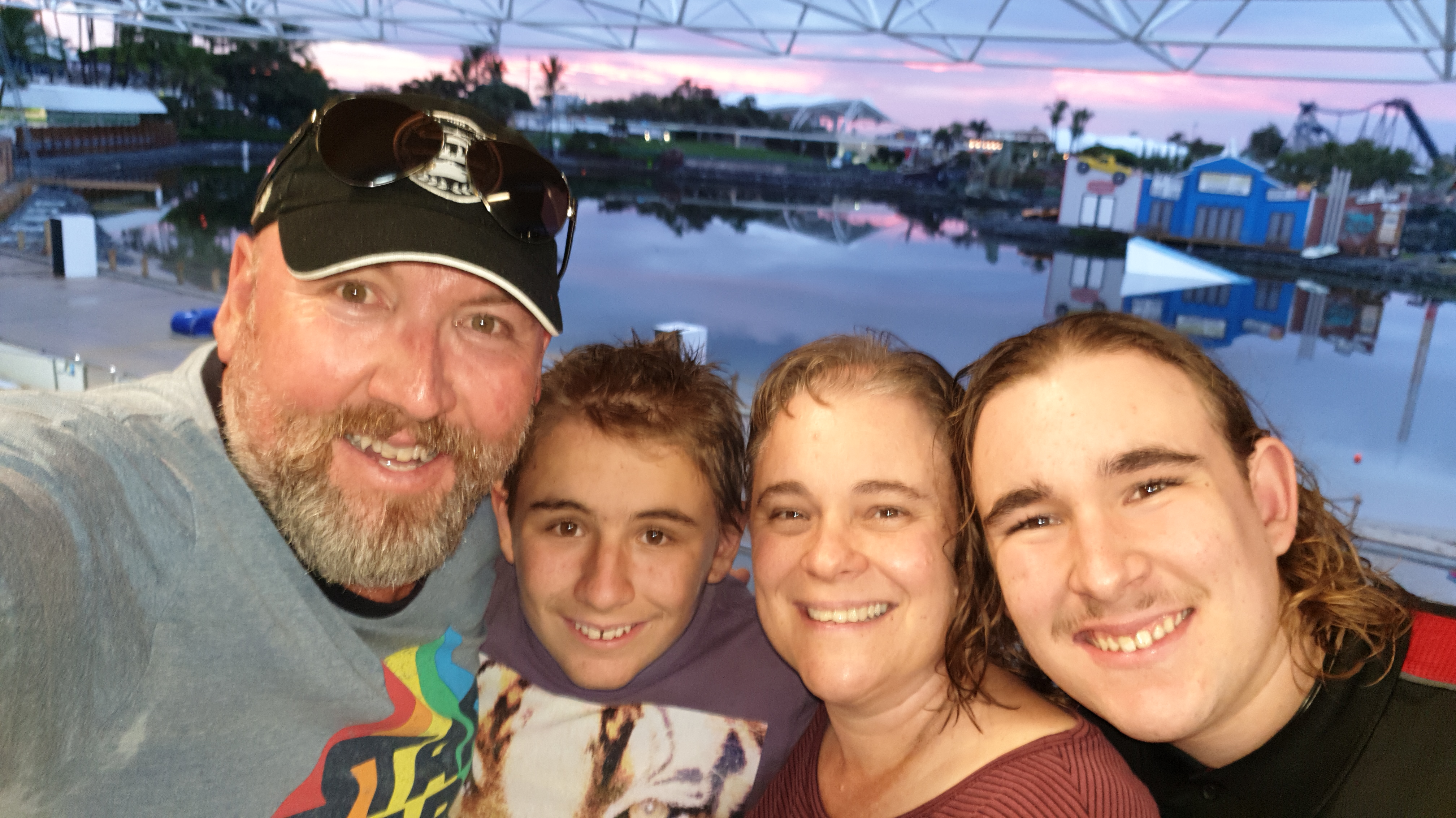 This is Alex and my version of the Macvean Clan today in 2019. Over 170 years since the first Macvean stepped onto Australian soil. But we are not just the Macveans we are so much more than just one name. We are the Cannon’s, Jones’s, Nicoll’s Raymond’s, Trippconny’s, Ashton’s, Stapleton’s, Mercer’s and Quinn’s just to name a few.

Alex is busy working on her Family History and has her own stories to share so the focus of this blog is going to be my clan and their stories. And what a clan they are.

My plan is to have no plan. Im just going to share with you whatever happens to be the subject that reveals itself and follow that wherever it leads us.

In the spirit of full disclosure, I am completely addicted to this journey and just loving the opportunity to share with you.

One final point, as my 3x Great Grandfather once wrote, “…I trust to be excused grammatical errors also errors in orthography and composition.”